Want to avoid the cost of a bad hire? Download our free hiring guide today.

Assessment Leaders is an independent Five Behaviors of a Cohesive Team Authorized Partner. Patrick Lencioni Five Behaviors of a Cohesive Team is an assessment-based learning experience that helps individuals and organizations reveal what it takes to build a truly cohesive and effective team in the most approachable, competent, and effective way possible. 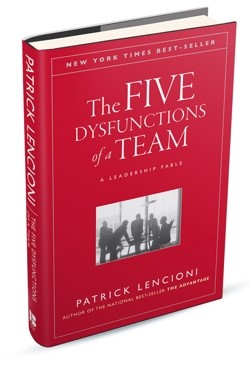 The Five Behaviors profile is grounded in the model described in The Five Dysfunctions of a Team, the internationally best-selling leadership fable by Patrick Lencioni. Powered by Everything DiSC®, the profiles help participants understand their own DiSC® styles. Bringing together everyone’s personalities and preferences to form a cohesive, productive team takes work, but the payoff can be huge—for individuals, the team, and the organization.

The program helps teams understand how, as a team, they score on the key components of The Five Behaviors model: trust, conflict, commitment, accountability, and results. Each individual on the team will also understand their own personality style and their team members’ styles, based on the DiSC model: D: Dominance, i: Influence, S: Steadiness, and C: Conscientiousness, and how their style contributes to the team’s overall success.

To gain this advantage, teams must: 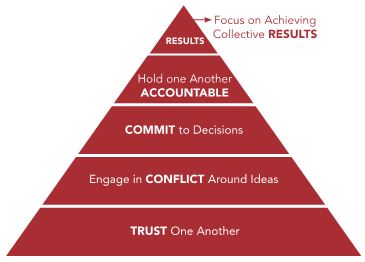 When team members are genuinely transparent and honest with one another, they are able to build vulnerability-based trust.

Engage in Conflict Around Ideas

When there is trust, team members are able to engage in unfiltered, constructive debate of ideas.

When team members are able to offer opinions and debate ideas, they will be more likely to commit to decisions.

Hold One Another Accountable

When everyone is committed to a clear plan of action, they will be more willing to hold one another accountable.

The ultimate goal of building greater trust, conflict, commitment, and accountability is one thing: the achievement of results.

The Five Behaviors Model is used to help team members learn to work together more efficiently and effectively and become a more cohesive team.

Everything DiSC is a research-validated personality assessment that helps you build more effective working relationships based on an understanding of your behavioral style and those of others. Click here to learn about the best-in-class Everything DiSC solutions we offer. Everything DiSC® is a trademark of John Wiley & Sons, Inc.

CheckPoint 360° is a 360-degree leadership assessment used to help managers identify and prioritize their own development opportunities and leadership skills.

Everything DiSC® Agile EQ™ is a classroom training and personalized learning experience that teaches participants to read the emotional and interpersonal needs of a situation and respond accordingly. By combining the personalized insights of DiSC® with active emotional intelligence development, participants discover an agile approach to workplace interactions and learn to navigate outside their comfort […]

Everything DiSC Work of Leaders (English-US)

Can't find what you're looking for?